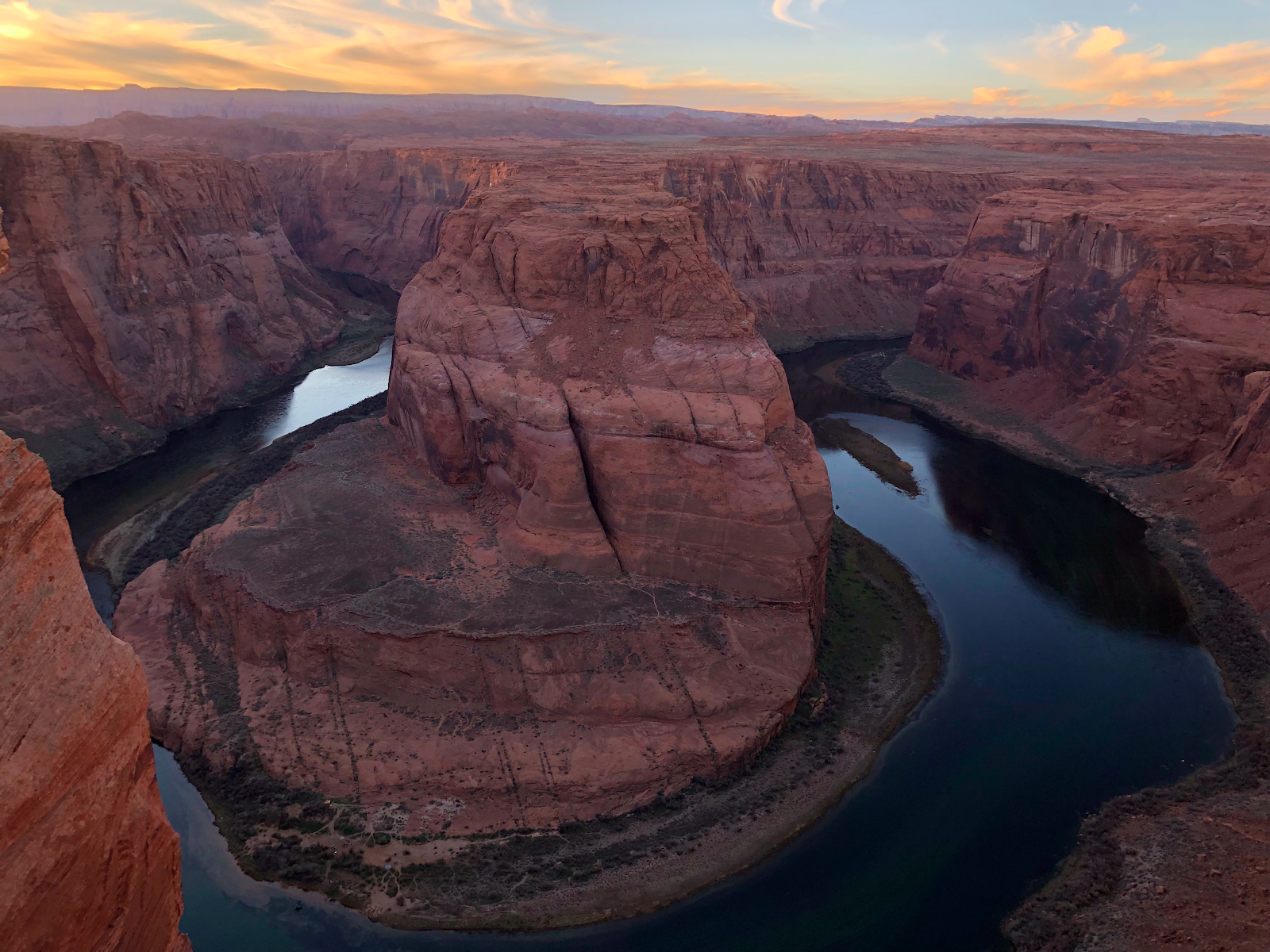 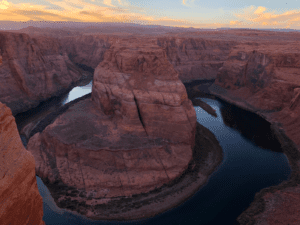 Across the Country and Back in a Week

In December, I had the unforgettable opportunity to drive from Ohio to the coast of California and back. This was my second cross-country road trip of the year, and throughout the four collective weeks I spent living out of a car, I discovered a few necessities that I would have been stranded without.

The trip started with a group text to my best friends. “Who’s driving to Cali with me over winter break?” My mom moved to California in August, and I had been eager to visit her ever since. With little hesitation, three of my best friends since middle school, Chris, Mel, and Suz, were in.

Along the way, we picked up another friend, Anthony. Though he did not have the time for a weeklong trip, he was able to fly into San Diego, spend a couple of days with us, then fly out of Phoenix. It was refreshing to introduce a new face to the group in the middle of the trip. Even with your best friends, spending every minute together without reprieve can cause tension.

A “plan” does not necessarily have to be a detailed itinerary. We discovered that the best way to appreciate every moment was to have just a rough draft of our route. Then, we could plan a day or two at a time, on the go. If we wanted to spend more time in one place, we would eliminate another. This allowed us freedom and flexibility within a tight schedule. 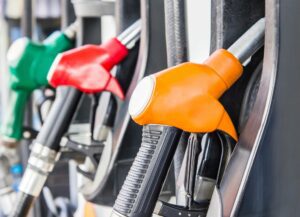 Long shifts at the wheel, hiking at elevation, and trying to run almost every day meant we spent a lot of time hungry and tired.

Trail mix and gas station coffee could only sustain us for so long. This gave us plenty of reason to find the best stops for food along the way.

One evening, we drove through Colorado planning to stop in Breckenridge, but found the town packed with visitors for a festival. Rather than wasting time waiting for a table, we drove on to a smaller town up the road, Frisco, Colorado, where The Moose Jaw caught our eye.

We were all craving cheap burgers and a beer that night after spending the day climbing Raspberry Mountain, and were pleased with the no-frills comfort of a small-town ski bar.

In the mornings, we frequented small, cozy coffee shops, ordering a drip coffee for Mel, cafe au lait for Chris, anything but coffee for Suz, and a dirty chai for myself. Once settled in, we would plan out the day ahead, finish our drinks, then be on our way, energized and excited to take on the day’s adventure.

The most enjoyable cup of morning coffee was brewed by our host at Casa de Monte Vista in Palm Springs. On the rooftop deck, palm trees framed our view of Mount San Jacinto rising out of the valley; the warmth of the sun gave us reason to enjoy a slow morning, sitting and talking, rather than rushing to our next adventure. 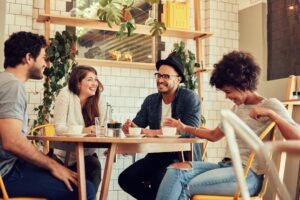 While we had our share of slow, relaxed mornings drinking coffee, the most memorable moments were those that could not have been planned. The second night of the trip, we had plans to camp outside of Moab, Utah, where we would be exploring Arches National Park the next day.

It was colder than we had expected that night, and Chris and Suz wanted to sleep in the car rather than camping. We set up one tent and filled it with blankets, and Mel and I were off to bed, bundled in layers of coats, sweatpants, socks, and gloves.

I drifted off quickly, but a few hours later awoke to Mel climbing over me and out of the tent. She had been unable to sleep because of the cold and was retreating to the car.

It must have been around 1 o’clock in the morning and I figured I would be able to fall back asleep as easily as I had earlier that night.

It had gotten significantly colder and within an hour or two, I started to lose feeling in my hands and feet. I decided to join the other girls in the car, curling up in my sleeping bag in the driver’s seat, drifting in and out of sleep until daylight broke a few short hours later.

In the morning, we went out to take the tent down and repack it, and found it covered in a layer of frost. Mel and I were both thankful to have slept in the car, as it had gotten down to a low of 19 degrees overnight. 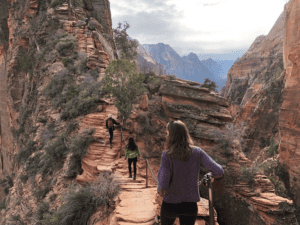 Undeniably, some days frustrated us and left us sleep deprived. Others, we spent in awe. On the third day of our trip, we ventured to Zion National Park in Utah to complete the renowned trek to the top of Angel’s Landing. Conditions on the trail in the winter can be dangerous so I was a bit worried knowing there had been snowfall the week before.

Luckily, the sun was out, melting the last of the leftover snow and ice. From the trailhead, we looked to the top of the landing and began to hike up switchback after switchback. The further we climbed, the steeper the trail became, challenging us both physically and mentally as we gripped the metal chains bolted into the cliff, trying not to look over the edge to the valley where we had begun, 1700 feet below.

Spontaneous decisions left lasting impressions as well. While in Palm Springs, California, the rest of the girls turned in early after dinner, but Anthony and I decided to squeeze as much adventure as we could into the long day.

Downtown, we wandered the shops under the streetlights, exploring the small city, and people watching. Still not ready to call it a night quite yet, we jumped back in the car, deciding to head toward Joshua Tree National Park.

The drive took us over an hour outside the city, and there was not another car in the park as we drove to the top of Keys View, a spot recommended by a local earlier that day. From this mountain top lookout, the stars above us looked as close as the ambient city lights below.

It was one of those moments that made it feel like we were the only two people in the world. I was thankful to be there late in the night to have the typically crowded spot all to ourselves. 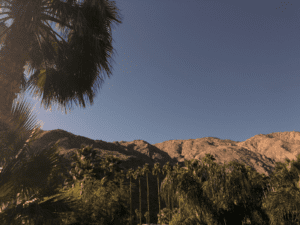 Some moments that seemed like bad timing made for the most appreciated and memorable of the trip. After stopping at the Grand Canyon, we decided to drive another two hours north, out of the way of the remainder of our trip, to see Horseshoe Bend.

The drive took us along the Colorado River through Navajo Indian Reservations toward Page, Arizona. As we got closer to our destination, traffic became congested; we saw cones and a few police cars off the road before reaching a sign telling us that parking was completely full.

We continued driving past, until two miles ahead, where we reached the small town. Since we had driven two hours out of our way for the single sight, none of us wanted to leave without seeing what we had come for. We laced up our running shoes, and ran the two miles there and back along the highway, to find one of the most incredible viewpoints of the trip.

While it is undeniably important to pack a map to get you to your destination, the right pair of shoes to climb a mountain, and cash for tolls, there are other necessities that will not be found on a typical Road Trip Checklist. Your mindset, how you react to good and bad moments, and the people you travel with can make your trip either magical or miserable. The choice is completely yours.