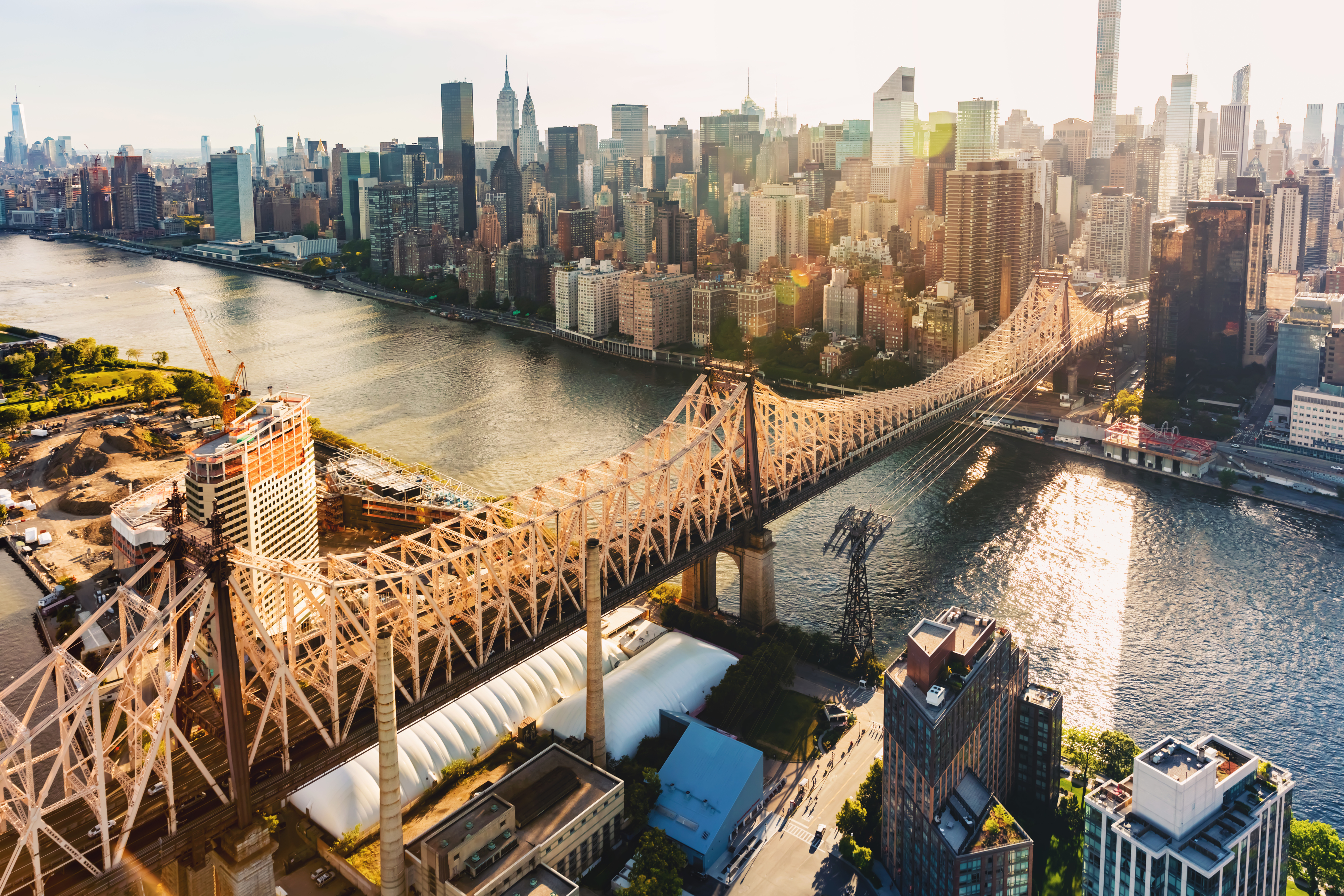 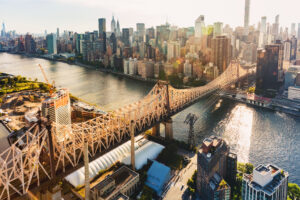 Manhattan, The Bronx, Queens, Brooklyn and Staten Island. Sounds like a great tour of New York, doesn’t it? In reality, these are the five boroughs of New York City we travelled through during the Five Boro Bike Tour on May 5, 2019. While I have participated in previous bike races and bike tours, this was by far the most incredible for me.

While a bike “race” is simply a contest to see who can get to the finish line first, a bike “tour” is a means to see and experience the route up close and personal. There are opportunities along the way to see the sights, to take photos, and to take a break when you need it, while still proceeding toward the finish line. Normally there is an allotted time to finish the tour, as busy streets are usually closed to traffic for a period of time. 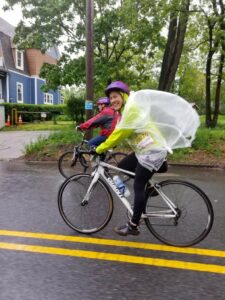 The first Five Boro Bike Tour was held in 1977 when 250 riders rode 50 miles through New York City with no road closures or protected bike lanes. Their mission was to show New Yorkers that cycling is a safe, viable way to get around the city. Today, entry is limited to 32,000 people who come from around the world to participate. About half are residents of New York state, and about 11,000 actually live in New York City. The tour route crosses five bridges over two rivers, the Hudson River and the East River. If the current 40-mile route is expanded in the future, the number of entrants may also be increased.

I was lucky enough to have a friend travelling to the New York City area who could transport my bike, enabling me to ride my own personal bike for the tour. Our group of five bikers elected to drive our transportation vehicle to the end of the route on Staten Island and park it there. Then riders with their bikes began boarding a ferry to the start line in Manhattan. 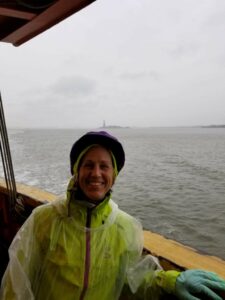 A closeup view of the Statue of Liberty with her torch held high in the harbor gave everyone faith that they would complete the course. With numerous waves to follow, the initial group started at 7:30 am.

Although the day before the tour had been hampered by occasional rain, it did not bother anyone who attended the packet pickup and trade show event at Pier 36’s Cruise Terminal. About 100 vendors exhibited an array of products from the latest in bikes to cycling apparel and gear. The weather on Sunday, however, was not nearly as kind. It poured down rain from start to finish, and I was certainly grateful for my waterproof jacket.

Starting with my original group of riders, I stayed side-by-side with them for about 5 miles before I took off at a faster pace. At that point, we entered Central Park and riders were given two course options to alleviate the congestion of the narrow road. Everyone joined back together on one route before we exited Central Park. 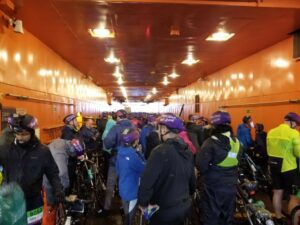 We eventually reached our first bridge, the Madison Avenue Bridge, where we crossed the East River into The Bronx. Moving on, at around the 10-mile area, we crossed the 3rd Avenue Bridge returning to Manhattan. The route then followed the East River passing 84th Street. At the Queensboro Bridge, our third bridge, we crossed over into Queens at around 15 miles. A short loop in Queens took us near Astoria Park and across our fourth bridge. Although I would have enjoyed the luxury of a stop for a drink, a photo, or a rest, I continued plodding along through the rain determined to reach the finish line.

We again followed the East River and at the 20-mile mark, we passed the Con Ed Learning Center. At 26 miles, in Brooklyn, we saw the Commodore Barry Park and at the 30-mile mark, we were headed down the home stretch to the Gowanus Expressway. 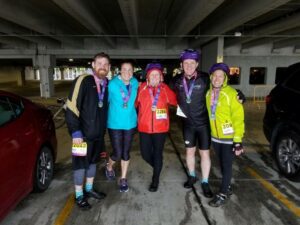 At this point my high was so incredible I started thinking only 10 miles left and I was slightly disappointed because I felt so strong at this point, like I was unstoppable.

Mile-marker 35 was in the middle of our fifth bridge, the Verrazano-Narrows Bridge, a double-decked suspension bridge that carries thirteen lanes of traffic on two levels, and took us back to Staten Island and the 40-mile finish line. The Verrazano Bridge was by far my most favorite part of the entire ride. It was a steep but gradual incline the first half and the second half, an exhilarating downhill ride to the fifth borough the bike tour had to offer.

During the ride I saw places like Barry’s Bootcamp, the fountain from the popular television show “Friends,” the Brooklyn Zoo, One World Trade Center, Trump Tower, and double-decked bridges with traffic completely diverted to one deck to make the other level available to riders. 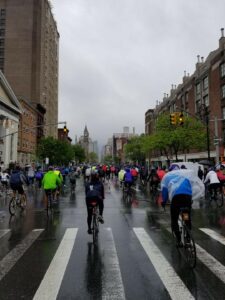 The Finish Festival, held in Fort Wadsworth and open to tour participants only, offered food vendors, music and entertainment. It was also an opportunity for participants to have their photos taken with the Verrazano-Narrows Bridge in the background.

Tired, yet proud of myself for having the stamina to finish in what was a continuous downpour. My joy was diminished when I saw a photo of my co-riders stopping for breakfast at a restaurant while I was still pedaling through the rain. That only lasted a few minutes, though, until I again realized my accomplishment. I travelled through five New York Boroughs, 40 miles to the finish line. Lady Liberty was right!

I will always remember my ride in the Five Boro Bike Tour in 2019 and I hope that I can do it again someday. And if you ever get a chance to do it yourself, I highly recommend it. Just hope for better weather. In the end, if I had the choice to ride in the rain or skip it all together, I would definitely pick ride in the rain.