From Heart Attack to Ironman 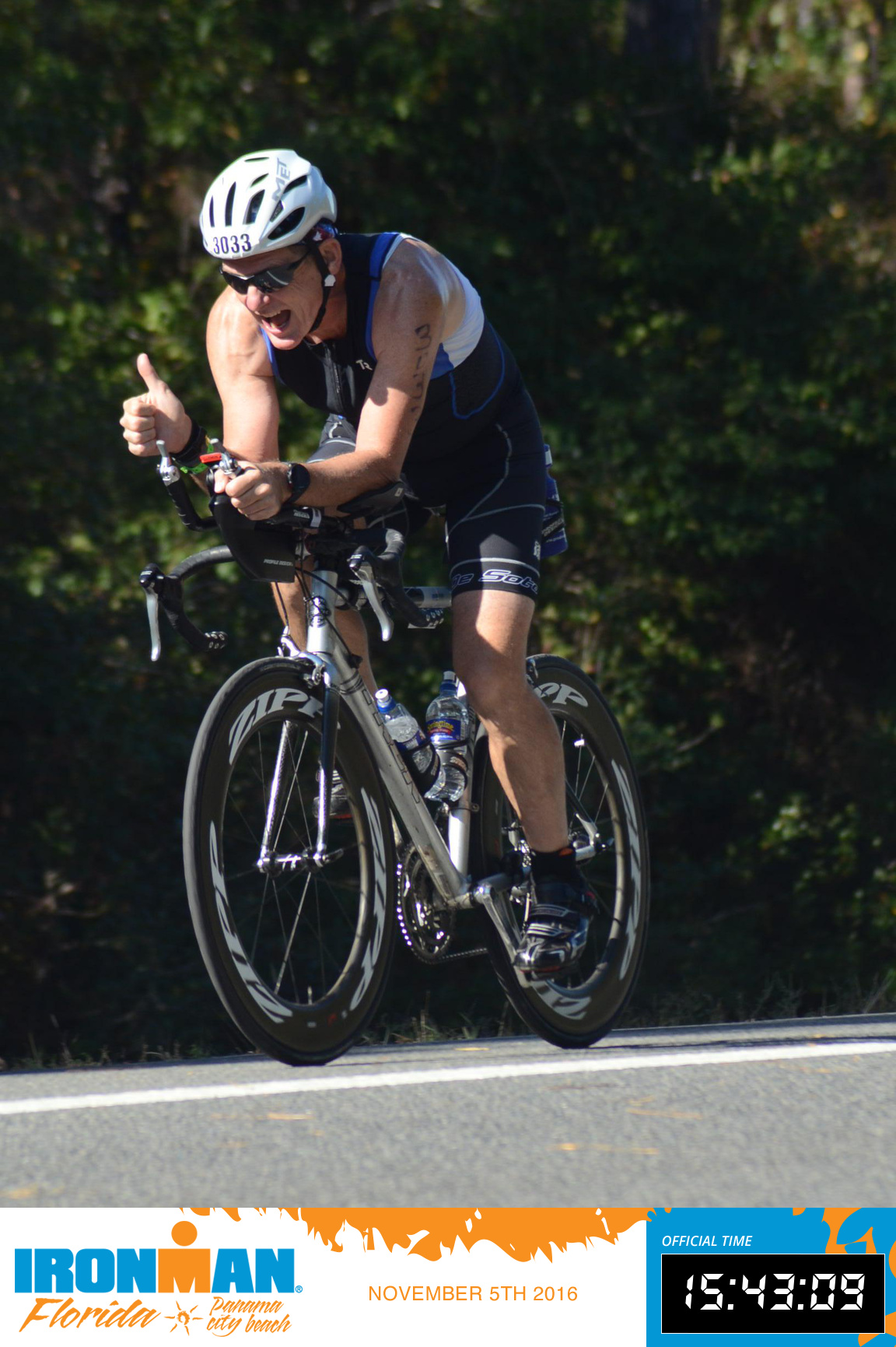 0n January 23, 2015, I had a heart attack at the age of 58. Everyone who knew me was surprised as I had always been a runner and fitness-minded individual.

I had been in a fairly aggressive workout program from August through January to get ready to run distance again. That night in January I had my first workout break and suddenly had severe heartburn. My wife, Anne, made me go the hospital at 4 o’clock in the morning. Within the hour, I was in surgery and required two stents.

That began a 22-month journey to compete in my first Ironman competition (2.4 mile swim, 112 mile bike, and 26.2 mile run) in Florida. I ultimately finished the event in November of 2016 in 15:43. The personal satisfaction was great, but I realized that the journey getting to the race in many ways outweighed the memories of the actual day. This is the rest of the story.

The initial cardiac recovery was closely monitored as I met routinely with my cardiac team and rehab group. They were great at balancing my push to get better with being smart. Although my heart felt great immediately after the surgery, I had to listen to the medical personnel rather than just my instincts.

The intensive sport discussions were new to many helping me medically as most of their cardiac patients had other challenges vs. how hard to push each day.

We ultimately taught each other and jointly set boundaries. The most dramatic change to training was learning to use the heart rate as my primary training tool. A great reference is the author Joe Friel. 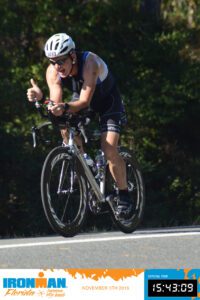 Most of the summer of 2015 was mainly following the rehab program; long walks up to 26 miles and long bike rides. My progress was good, and Anne and I rode the one-week RAGBRAI ride of about 500 miles across Iowa in July with an organization focused on the support of disabled riders, Adaptive Sports Iowa. We continue to ride and support ASI annually while developing many lifelong friends.

I underwent rotator cuff shoulder surgery in September so I could swim. Focused on rehab, I was finally cleared to run on New Year’s Eve, 2015 and celebrated by running a 5k later that afternoon.

By November 2015, I had financially committed to the 2016 Florida Ironman. My family was supportive from the beginning getting me a Florida 2015 Ironman shirt with the date crossed off and 2016 embroidered over it. That support shirt became my primary workout shirt.

The year 2016 began with me realizing I was an almost 60-year-old who was a terrible swimmer, mediocre cyclist, and had just been released to start running again. I had ten months to get ready to run Ironman Florida. In January and February, I focused on putting together a detailed plan. I also continually learned through reading and the assistance of a number of formal and informal coaches.

I searched and found a local guide/coach to validate my plan. After our initial discussions, he provided a more formal platform and overall progression, assisted in reviewing some specific techniques to improve my swimming and running, continued to monitor my progress, and provided me ongoing advice through the Florida race.

I worked with a running partner to keep me on track and work on pace. Janet Eagon of JET Fitness and I worked together through the year, including running our first triathlon that May. The assistance of a training partner was incredibly helpful. I also found the local YMCA and coaches for the adult swim programs invaluable. 2016 demonstrated to me the huge community available to support you if you just look for them.

Participating in other races and activities as part of the overall training with family and friends was incredibly rewarding both from a training and personal level. It was great to join in new experiences; beyond traditional races, we did mud runs, obstacle events, the Burning River 100 Miler Relay, kayak support while swimming, ocean swimming, etc. It felt great to still be able to participate with athletes of all ages and have fun at the same time.

In spite of a few physical setbacks during the summer of 2016, including a detached retina and a precautionary heart procedure, I competed in an Olympic and Half Ironman Triathlon in August/September. It was time for Florida.

After surviving a deer accident in Georgia, I arrived in Panama City Beach. The participants were impressive. I had the luxury of not working for the duration of this journey. It was humbling to see so many professional people who had carved out the time to compete in this event. I also continued to learn. Here is some advice I was given: this is an endurance race; pace yourself as it is all about the run at the end. This is your first Ironman–just be happy to successfully finish. And finally, enjoy the experience.

My family arrived and was along the route to support and cheer multiple time over the 15 hours. A final blessing was meeting a participant with 7 miles to go and we jointly walked/jogged (about a 13-minute mile pace) to get to the finish line at about 11 pm. Great conversation and joint support.

I continue to find new challenges and support groups. The internet has numerous running groups and some incredible heart support groups for athletes including Ironheart Connect who produced the film Flatline to Finish Line. Over the 22 months, I was blessed with tremendous family, friends, medical support, and coaches, and was given the opportunity to establish and strengthen so many relationships. These kinds of journeys, from a 5k run to an Ironman, are ultimately a “community” accomplishment to be enjoyed by each athlete.

From Heart Attack to Ironman

Send Us an Email
Advertise With Us
View online or pick up a copy
Recent Magazines
Copyright © 2020 Compass Media. All rights reserved.
Contact Us