The National Museum of the U.S. Air Force, located at Wright-Patterson Air Force Base near Dayton, Ohio, is the world’s largest military aviation museum. With free admission and parking, the museum features more than 350 aerospace vehicles and missiles and thousands of artifacts amid more than 19 acres of indoor exhibit space.

Each year hundreds of thousands of visitors from around the world come to the museum to see many rare and one-of-a-kind aircraft and aerospace vehicles, and thousands of historical items that chronicle the evolution of military flight from the Wright brothers to today’s stealth aircraft. 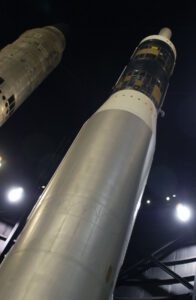 A number of popular and historically significant aircraft headline the museum’s growing collection including Air Force One, SAM (Special Air Mission) 26000, which served eight presidents from the Kennedy to Clinton administrations; the B-17F Memphis BelleTM, which was the first heavy bomber to return to the U.S. after completing 25 missions over Europe during WWII; the only remaining XB-70 Valkyrie, which flew at Mach 3 (2,000+ mph) and was a highly-advanced aircraft tested in the 1960s; and the B-29 Bockscar that dropped the atomic bomb on Nagasaki.

Other noteworthy aircraft include a rare SPAD XIII; the C-141C “Hanoi Taxi,” which airlifted the first American prisoners of war to freedom from Gia Lam Airport in Hanoi, North Vietnam, on Feb. 12, 1973; the world’s only permanent public display of a B-2 stealth bomber; and remotely piloted aircraft such as the Predator, Reaper and Global Hawk.

The museum’s Space Shuttle Exhibit is highlighted in the Space Gallery, and features NASA’s first Crew Compartment Trainer (CCT), which was used to train space shuttle astronauts for their missions. The exhibit allows visitors to experience a full-size representation of a NASA space shuttle payload bay, which displays a Teal Ruby satellite, and look into the flight deck and mid-deck levels of the CCT. The gallery also includes the massive 96-ton Titan IVB space launch vehicle, Mercury, Gemini and Apollo spacecraft, and several experimental aircraft and even balloon gondolas that helped pave the way to space flight.

Recently opened exhibits include a new display titled “Flying the President,” which features memorabilia flown aboard Air Force One from the FDR to Trump administrations. This exhibit highlights the dedicated men and women of the Air Force who perform this critical, no-fail mission, and features items collected from Air Force One communications specialists, flight attendants, maintainers, support personnel, and security personnel.

Other recent exhibits include those detailing the Air Force’s involvement in managing Global Positioning System (GPS) and using Defense Support Program satellites. The new GPS exhibit, titled “Global Positioning System and its Impact!” occupies nearly 700 sq. ft. of floor space and takes the shape of a full-size current replica GPS satellite. Displayed on a very large floor graphic of the Earth, the central satellite unit includes eight interpretive panels where the satellite’s solar panels would be.

Another display titled “IUS-DSP Booster and Satellite: A Winning Combination” explains how the Inertial Upper Stage (IUS) and Defense Support Program (DSP) rode into space together on a rocket such as the Titan IVB. Once in space, the IUS took over to boost the satellite even higher. IUS vehicles placed DSP satellites in “geosynchronous” orbits – stationary spots above the Earth – about 22,300 miles high. The museum also has a DSP satellite on display, which was a full-sized (non-functional) structural test vehicle used to verify and test satellite configuration, and came to the museum from Northrop Grumman in August 2010.

In early 2021, the museum will open another new exhibit titled “Women in the Air Force: From Yesterday into Tomorrow,” which highlights achievements in their civilian and military careers with an emphasis on the U.S. Air Force and its predecessors. The exhibit, which is being installed in several galleries throughout the museum, covers historical issues; changes in laws and attitudes; and women’s contributions to the Air Force mission. Many of the displays contain one-of-a-kind artifacts used by women in the Air Force from many different eras.

The National Museum of the U.S. Air Force is open daily from 9 am to 5 pm. For additional information or to plan a trip, visit the museum’s website at www.nationalmuseum.af.mil or take a virtual tour at http://www.nmusafvirtualtour.com.

Send Us an Email
Advertise With Us
View online or pick up a copy
Recent Magazines
Copyright © 2020 Compass Media. All rights reserved.
Contact Us