Keeping up With the Times

Nearly 100 years ago, a tradition of generous hospitality began at the summer estate of Earl Oglebay in Wheeling, West Virginia, just two hours from northeastern Ohio. Earl Oglebay willed his spectacular country estate, known as Waddington Farm, to the City of Wheeling for public recreation nearly a century ago. Today, the picturesque beauty of Oglebay’s property has expanded to 2,000 acres of year-round recreational activities and exceptional overnight accommodations amid the property’s natural beauty, making it West Virginia’s most popular recreation destination.

But it wasn’t until 1957 that Oglebay became a comprehensive year-round resort when Wilson Lodge opened to the public with 57 rooms. And just nine years later, Oglebay would add the 45-room Kline Wing addition to the lodge. The 60’s style décor at the time of its opening was new and cozy. A blend of rustic charm and warm colors had guests feeling right at home. This wing addition was the first of three to Wilson Lodge. The addition of Byrd Wing would be built almost 14 years later with Lakeside Wing to follow.

Oglebay is certainly no stranger to construction or renovations. Expansions to Wilson Lodge included dining room renovations in 1989 and 1999, and the addition of a conference center wing in 1997. In 2006, Wilson Lodge once again underwent major construction with the addition of the 53-room Lakeside Wing. This new wing opened in May of 2006 and features deluxe king and double queen rooms and suites. The $15 million construction project also included a complete redesign and renovation of existing guest rooms, six new king rooms, and a new 5,000 square-foot spa that was christened West Spa.

Beginning in January 2022, the latest renovation of Oglebay’s Wilson Lodge will transform and incorporate the 50+ year old Kline Wing into an extension of the West Wing. The rooms will be uniquely designed, providing guests with more open space, updated décor and a visually appealing color palette of warm and neutral tones throughout the suites. Additional renovations also include new flooring, enhanced lighting, and updated bathrooms. A new elevator and refreshed look complementing the hallways of West Wing will complete the transformation.

“The renovation of Kline Wing is long overdue. We are excited to soon offer guests the comfort, modern amenities and excellent customer service they have come to expect,” said Beth Whitehouse, Wilson Lodge General Manager. 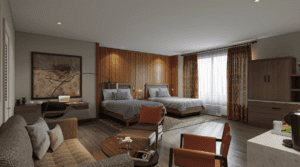 For additional information about booking a stay at this hidden gem in West Virginia, visit oglebay.com or call 877-436-1797.