Time flies when you’re doing what you love! Thirsty Dog Brewing Company first opened in 1997. Twenty-five years later, their team is continuing to do what they love—making delicious, world-class craft beer.

Reaching their 25th anniversary helps secure Thirsty Dog as one of the oldest craft breweries in Ohio. Originally, they opened shop as a brewpub restaurant in Canton, Ohio. After several years of increasing community interest, the Thirsty Dog team decided to close the restaurant portion of the brewpub so that they could focus all their attention on making the best craft beer possible.

To help scale production efforts, they moved the brewery into the former home of Burkhardt Brewing Company, in Akron. Carrying on the city’s rich brewing legacy, their brew crew began to experiment crafting different styles of beer.

Today, Thirsty Dog Brewing Company produces over 40 unique flavors of beer. Each one is meticulously hand crafted in small batches using the finest ingredients. High-quality malted barley is the source of the beer’s sweetness and body.

Select American and European hops are used to balance the malt sweetness, and at times to add special flavors and aromas to the beer. Their carefully selected ingredients, along with specially designed recipes and brewing processes, give Thirsty Dog beers unique flavor profiles that are hard to find in today’s mass-market “one size fits all” society.

As the popularity of their beer spread throughout the east coast, the Thirsty Dog team decided to return to their roots, opening a Taphouse and Sour Haus. At each of these locations, guests can enjoy a vast selection of Thirsty Dog Beer and delicious food. You can find more information about these locations on their website thirstydog.com. 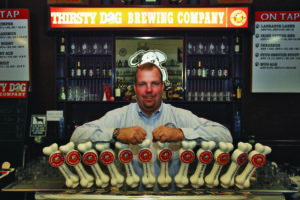 “It has been an amazing 25 years,” said John Najeway, Thirsty Dog co-owner. “We were one of the first licensed breweries in Ohio, and now there are over 350 of them competing for the same consumers. As we embark on our 25th year, keep an eye out for continued innovations from us. Be sure to stop by the Taphouse to sample our latest offerings and join us for a pint or beer dinner to celebrate 25 years. Cheers!”

At Thirsty Dog Brewing Company, full flavor, delicate balance, texture, and aroma combine to make beer an infinitely complex and thoroughly enjoyable experience. Their craft brewed beers are far more diverse in range and character than the small spectrum of mass-market beers offered to the American public by the large national breweries.

This diversification has helped Thirsty Dog stand out from its competitors and will continue to keep craft beer enthusiasts falling in love with their brews for decades to come.