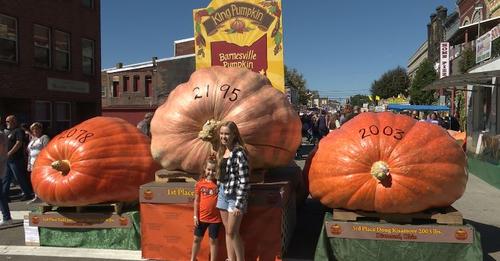 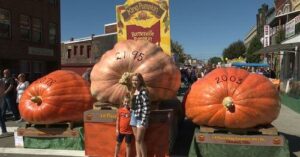 Picture a pumpkin you would normally purchase from your local farm or grocery store to carve for Halloween. It weighs between 12-25 pounds depending on the size. Now picture a pumpkin weighing 2,195 pounds.

This was the weight of the Barnesville Pumpkin Festival’s King Pumpkin in 2021 – a new state record. They auctioned it for $8,500.

You may ask yourself what one does with the pumpkin after it sells? The highest bidder takes custody of the pumpkin for 10 days and they usually display it at a place of business. After the 10 days, they gut the pumpkin and dry the seeds to be sold at the following year’s festival. 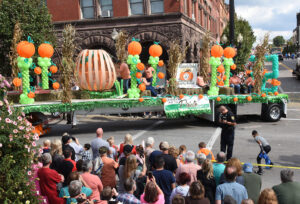 The Barnesville Pumpkin Festival is an annual tradition for families and friends to come and enjoy one of Ohio’s most popular festivals. The festival celebrates the growing and harvesting of pumpkins and other fall harvests and takes place during the last full weekend in September.

There is plenty to see and do, and best of all, admission is free” said Jackee Pugh, Executive Director of the Belmont County Tourism Council. 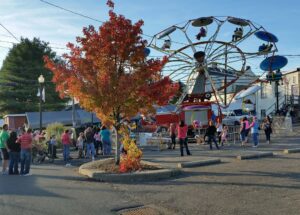 The Barnesville Pumpkin Festival dates to 1964 when a resident, Vernon Burkhart, started a fall fair. According to the Belmont County Tourism Council, it was originally held in the Assumption Catholic Church basement and known as the Barnesville Fall Fair. The purpose was to showcase Belmont County’s beautiful acres and the things which grew on the land.

By 1970, the event had expanded to include its first street parade and changed its name to Ohio Pumpkin Festival.

Pumpkin ice cream was also introduced and manufactured locally by Damsel’s. Throughout the 70s, the King Pumpkin was displayed on Main Street, enjoyed a Banjo and Fiddle Contest, and added the Big Pumpkin Auction. 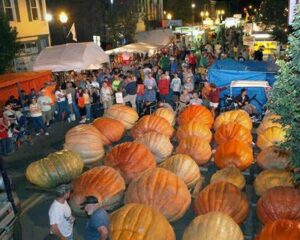 Once the 80s came around, the Wednesday night weigh-in for the giant pumpkin became popular, and the Saturday morning parade brought in approximately 50,000 spectators. In 2002, they changed the name to the Barnesville Pumpkin Festival. Attendance has grown to over 100,000 spectators over ‌four days, and the festival includes all things pumpkin from food to contests, a car show, a giant pumpkin parade, and a 5K race.

The festival has even seen its share of celebrities throughout the years. In 1999, the festival was featured on the NBC Today Show and The Discovery Channel. The American Bus Association named it one of the top 100 events in the US.

To plan your visit to the Barnesville Pumpkin Festival, visit www.barnesvillepumpkinfestival.com.