When I got my Bianchi bicycle a few years ago I never imagined what was waiting for me on the Great Allegheny Passage (GAP). Stretching from Pittsburgh, Pennsylvania, to Cumberland, Maryland, this 150-mile biking and hiking trail is truly an adventure for the entire family or just you and another person.

The trail is built mostly on old rail beds and is constructed of crushed limestone, so for the most part it is a smooth ride, although it does get a little bumpy in some areas. The Passage is open from dusk to dawn with numerous picnic tables and comfort stations along the way. Although it’s always a good rule to pay attention to the trail and where you are going, the amazing views will have you distracted most of the time.

It’s very important to be ready for the unexpected. There are several checklists online of items you might need. We took extra inner tubes, a tire pump, a first aid kit, snacks and water. You should always have at least a quart of water a day, so take more than you think you’ll need because dehydration will set in quickly.

My brother-in-law, Chris Eagon, and I chose to make it a three-day trip. Arriving in Cumberland around 11:00 am, we decided to have lunch before we started our first day’s journey.  After being on the trail a mere 15 minutes, we encountered our first challenge when Chris got a flat tire. After a quick repair, we were on our way again.

The first day we targeted 32 miles to our first stop in Meyersdale, Pennsylvania. Bikers can average roughly 12 miles per hour, while hikers average 2-3 miles an hour. The first day we fell way short of the 12-mile pace. The grade level was very difficult with a pretty steep constant incline up the mountain. 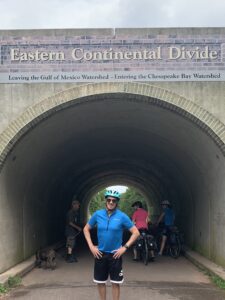 Sometimes the terrain was so steep, it felt like each mile was a challenge. The various stops we made for water and snack breaks were breathtaking. I would look back to where we had been and couldn’t believe how high we were, elevating with each passing mile.

That first day, I took a memorable photo at the Mason-Dixon Line where a property dispute was settled in 1767. A large monument in the area indicates where Maryland and Pennsylvania meet. We crossed the Eastern Continental Divide, left the Chesapeake Bay Watershed and entered The Gulf of Mexico Watershed. A tunnel commemorates this location which abounds with great photo opportunities.

We went through a few tunnels that were pretty exciting. The 914-foot Brush Tunnel under Piney Mountain was epic, but the longest and most exciting was the 3,294-foot Big Savage Tunnel. It is well maintained and lighted, so we easily made our way through. We crossed the Curved Viaduct and Bollman Bridge, part of the few remaining iron trusses in the United States.

After about six hours of peddling, we arrived at Meyersdale a quaint little town with inns, and bed and breakfasts throughout. We were told by the host at Yoder’s Guest House, the Bed and Breakfast where we stayed, that The Meyersdale Historical Society recently renovated the former train station to make it a gift shop. The 360-degree views in this small town are astounding. There are numerous camping facilities along the trail if that’s something you enjoy.

We carried all our belongings for the 3-day journey in saddle bags on the backs of our bikes. It made it a little harder to pedal, but it’s best to keep everything at a minimum since you won’t want the extra weight. There are numerous towns and shops along the way where you can purchase food, snacks and water.

We packed our clothes in plastic bags in case we ran into rain. It’s best to make this journey with another person since there are several areas on the trail where there is no cell phone service. If something were to happen to you, such as an accident or illness, you wouldn’t have communication to get help. That might mean waiting until someone comes along to help you or get help for you.

The next day we had a scrumptious breakfast and took off towards Connellsville, Pennsylvania, which was roughly 56 miles away. We had heard that the second day of the trek would be the most beautiful.

The trail would take us through OhioPyle State Park. Having been to OhioPyle in the past, I remembered that the whitewater rafting and trails in the area were spectacular. I knew that area would not disappoint.

This section of the GAP attracts tens of thousands to the area every year. The Youghiogheny River flows directly through OhioPyle and the rushing water of Class V rapids next the trail adds to the exhilarating experience of the picturesque storybook of nature.

While traveling through this area we came upon a family of young deer right next to the trail and river. Accustomed to humans on the trail, they looked at us as if to say, “What’s up?” I will never forget that memorable experience.

After arriving in OhioPyle, we did go off the path and investigate the town. We visited a few shops and restaurants, planned our whitewater rafting trip for a future adventure, and visited the lagoons for a few photos.

Clouds appeared, so we checked the radar and saw that a rainstorm was headed our way. We put on our rain jackets and quickly jumped back on the trail, continuing to Connellsville.

About 15 minutes later, the rain cut loose. It was like a typhoon hit us. The rain was coming down so hard with the wind blowing, it was difficult to see in front of us as the trail became flooded. We had no choice but to push forward and keep pedaling.

The amazing feeling of the rain brought an overwhelming surge of excitement to me, as if to cleanse my soul. I never felt so alive with the scents of nature and the scenery before me.

The rain stopped and the sun came out quickly with steam permeating from the wet earth. It gave a sense of rebirth and newness to the experience. We stopped to take a photo of the amazing steam over the river and quickly continued.

Arriving in Connellsville we noticed numerous locations for overnight accommodations, restaurants and many churches for travelers. Also, directly along the trail is a beautiful Comfort Inn with all the amenities, including a pool and restaurant. Management advised that they cater to travelers who use the GAP trail.

Another option in that area is Seams Like Home Bed and Breakfast. They have rooms accommodating 2 to 4 people, including a 2-bedroom suite. The interior reflects a home away from home with a lounge area for movies and popcorn and a pool table. Outdoors there is a fire pit for roasting hot dogs and making s’mores after a hard day on the trail.

We stayed the night in a bed and breakfast, followed by an enjoyable breakfast the next morning. The final leg of our journey was 61 miles to Pittsburgh. The terrain was pretty easy with a few challenging hills.

As we inched closer and closer to Pittsburgh it was apparent that we were in the home stretch of our adventure. We passed through numerous towns with lunch locations, entertainment venues, bike shops for repairs and additional trails off the beaten path.

As we came into Pittsburgh, it was really cool to bike on the property adjacent to Kennywood Amusement Park. We could see the roller coasters above our heads.

Traveling over bridge after bridge, weaving from one side of the river to the other, we entered an area where the trail moved to city streets.

It was the only way to continue navigating the GAP trail to end of the line at Point State Park, which is where the Allegheny River meets the Monongahela River and the Ohio River begins.

Ending at the fountain at Point State Park in downtown Pittsburgh, I felt like I was running up the steps in the movie Rocky. The water from the fountain streams so high up in the air, it resembles a fireworks display celebrating the 150-plus miles we traveled.

I fulfilled a true accomplishment that I never thought was possible, even though I did train for this adventure. I advise anyone to go and experience this trail ride, even if you just do a small portion of it. You will not be disappointed.