After a cold and snowy 2021 winter a lot of you have probably been thinking spring for a long time now.  This certainly is the case for myself. The crisp fresh smells of spring and sound of song birds arriving from southern states has infiltrated my senses. Begin dreaming and planning now so that when the time comes for quality time off, you will be all set to visit a true mountain gem, Tucker County, West Virginia.

Located in the heart of the Appalachian Mountains, Tucker County finds itself one of the easier West Virginia mountain destinations to drive to. Only forty-five miles from Interstate 68, a funnel for I-70 drivers coming out of Ohio, are the towns of Thomas and Davis. You will be welcomed by these two small mountain towns, recognized as some of the finest small towns in West Virginia.

In a nut shell, Tucker County is paradise for anyone that loves the great outdoors and appreciates modern amenities that compliment any vacation destination. The big difference is our outdoors are the real deal. With tens of thousands of acres of public forest, abundant wildlife, and mountain tops that stretch up to 4,600 feet. Amenities do not lack either with abundant lodging options, a burgeoning art scene, dynamite restaurants, and award-winning breweries.

Perched upon the highest plateau east of the Mississippi River is the Dolly Sods Wilderness and Bear Rocks Nature Preserve. Hikers set out for multiple nights in the woods or rise early for one of West Virginia’s most famed sunrise locations. If you are a photographer, Bear Rocks is where the sunrise is best seen.  Otter Creek Wilderness is the second wilderness designated area finding itself within our county’s border.  These areas are extremely sensitive and demand leave no trace policies along with other regulations so the wildness stays a wilderness.

The Monongahela National Forest is 900,000 acres of continuous forest with hiking trails, world class trout streams, and West Virginia’s tallest peaks. In Canaan Valley are over 15,000 acres of protected lands under the Canaan Valley Wildlife Refuge. In 2020 a new headquarters and interpretive center were constructed and are open to the public. To say the least, Tucker County is full of opportunity for the outdoors men and women of all ages and abilities. 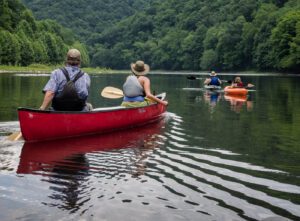 With the same awe our forests are known for, charming small towns dot the landscape and somehow live with only one stop light. The county of 7,000 packs a punch when it comes to hospitality and exceeding expectations. Parsons is the county seat located along the banks of the Shavers and Black Forks Rivers.  Whitewater and canoe/kayak trips begin in early spring at Blackwater Outdoor Adventures. The Allegheny Highlands Rail Trail goes through Parsons on its way to Thomas and Elkins.

Davis and Thomas are the life of Tucker County’s restaurant, arts, shopping, and live entertainment scenes. The two towns are only two miles apart and are proud to say you will not find any franchise stores here other than a grocery and general store. Thomas’s front street is a historic brick clad town grown from the coal industry. This is where motivated, young artists arrived 20 years ago to eventually establish several contemporary art galleries. This influenced coffee houses, restaurants, and shops to now occupy every store front available, bringing with it palpable excitement and life.

Davis was a lumber town transformed into a recreation destination in the 1950’s. Since then, restaurants, dining, and breweries had always been the town’s strong suit, as well as the trail head for over 100 miles of hiking and biking trails. Now various shopping opportunities dot downtown, rounding out everything you could possibly need in a town of 650.

Where to stay for your spring excursion is as abundant as Tucker County’s natural resources. For the simple minded, there are quality hotels, motels, and bed and breakfasts available with more charm than you can shake a stick at. Small wooded cabins are the most sought-after form of lodging and yes, you are covered there too. What really separates Tucker County from the rest are mountain home rentals perfect for multi family vacations or family reunions.

Recuperating from cabin fever?  Spring is around the corner and we have your remedy, Tucker County, West Virginia.