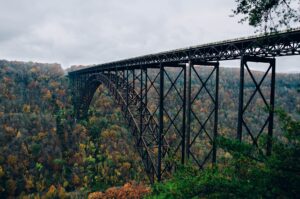 August 17, 1979, around 10 pm, Burton Ervin stepped out of the car onto the New River Gorge Bridge with his parachute ready to be deployed. The temperature hovered around 60 degrees, and he had to act quickly.

Word spread about his plans, and local authorities kept a close eye on the bridge.

With one step into the darkness, Burton plunged off the bridge, making history and setting the stage for a future for New River Gorge that is still going strong today. Police quickly picked him up unscathed but quite wet in the river below.

Today the New River Gorge Bridge, located in Fayetteville, West Virginia, celebrates 45 years since its completion. At the time of its opening, it was the longest steel arch bridge in the world, with a span measuring 1,700 feet, until 2003 when China Lupu Bridge beat it by just over 100 feet.

This majestic West Virginia bridge sits 876 feet above the New River, is 3,030 feet 6 inches in length, and weighs over 88 million pounds. It has proven instrumental in improving economic conditions in the area and increasing access and speed for travelers and locals alike.

When Ervin jumped from the bridge, he was not just living a dream he had, but he was showing what future this bridge could have. As an avid BASE (Bridges, Antennae, Spans, and Earth) jumper, Ervin argued that what he did could become a regular event for other jumpers. Fayette County Chamber of Commerce quickly took to the idea, and in 1980 the first Bridge Day was held, and by 1982 BASE jumpers began coming from all over the country. 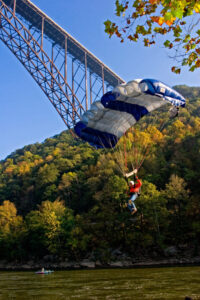 Each year, Bridge Day is celebrated on the third Saturday of October to embrace the fall foliage and weather. The event draws spectators and extreme sports enthusiasts alike. For runners, Active Southern West Virginia hosts the Bridge Day 5K race. It begins on the bridge and ends in historic downtown Fayetteville and has up to 500 participants.

Rappelling is also part of the celebration and is enormously popular. But you must be skilled. Unlike traditional rappelling, the steel structure provides unique challenges. Rappellers have ranged in age from 8 to 81.

If all this sounds a bit too daring, consider the High Line. It averages 150 participants a year and doesn’t require experience. Similar to zip-lining, but the descent is controlled. The drop is 300 feet while sliding 700 feet, allowing for plenty of time to enjoy the scenery on your way down.

Still not sure about all this adrenaline-pumping, chest-pounding excitement? Then perhaps the Bridge Walk is for you. Guided tours of the bridge take place 25 feet below the bridge. Guests get a behind-the-scenes look as they enjoy a 2 to 3-hour tour on the catwalk that is 24 inches wide. But have no fear; everyone is harnessed into a cable for safety. This event is available throughout the year. 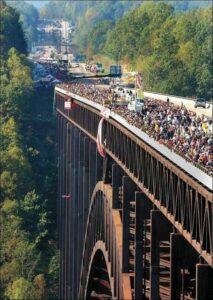 For the faint of heart, have no fear. There is something here for everyone; vendors, food trucks, stunning scenery, and best of all, this is the one day of the year when pedestrians can be on the bridge. Traffic is rerouted to ensure a safe environment for everyone. Into the Gorge bus passes are available for spectators who want a different view of the action. Buses will deliver you to the riverside where you can watch the BASE jumpers and view the rappellers under the Bridge.

According to Becky Sullivan, the Executive Director of New River Gorge CVB, Bridge Day has become West Virginia’s largest single one-day event and one of the most unique events in America.

The New River Gorge Bridge was not built till the 1970s, but the call for improvements on the steep, dangerous roads around the gorge began many years prior. In 1963, President John F. Kennedy addressed the need for economic development in the Appalachians, and in 1965, The Appalachian Development Highway System was enacted.

Today we recognize The New River Gorge Bridge as an engineering marvel designed by Michael Baker Jr. But without the dedicated, hardworking ironworkers who risked their lives building the bridge, in often harsh and unforgiving conditions, this stunning bridge would never have come to fruition. There was only one death on the project, and it occurred on the side of the hill when a piece of steel came loose and killed the worker.

As this stunning bridge stretches out across the New River Gorge National Park and Preserve, she claims her spot as a crowning jewel in the story of West Virginia’s past and future.  For more information, please visit https://officialbridgeday.com/.