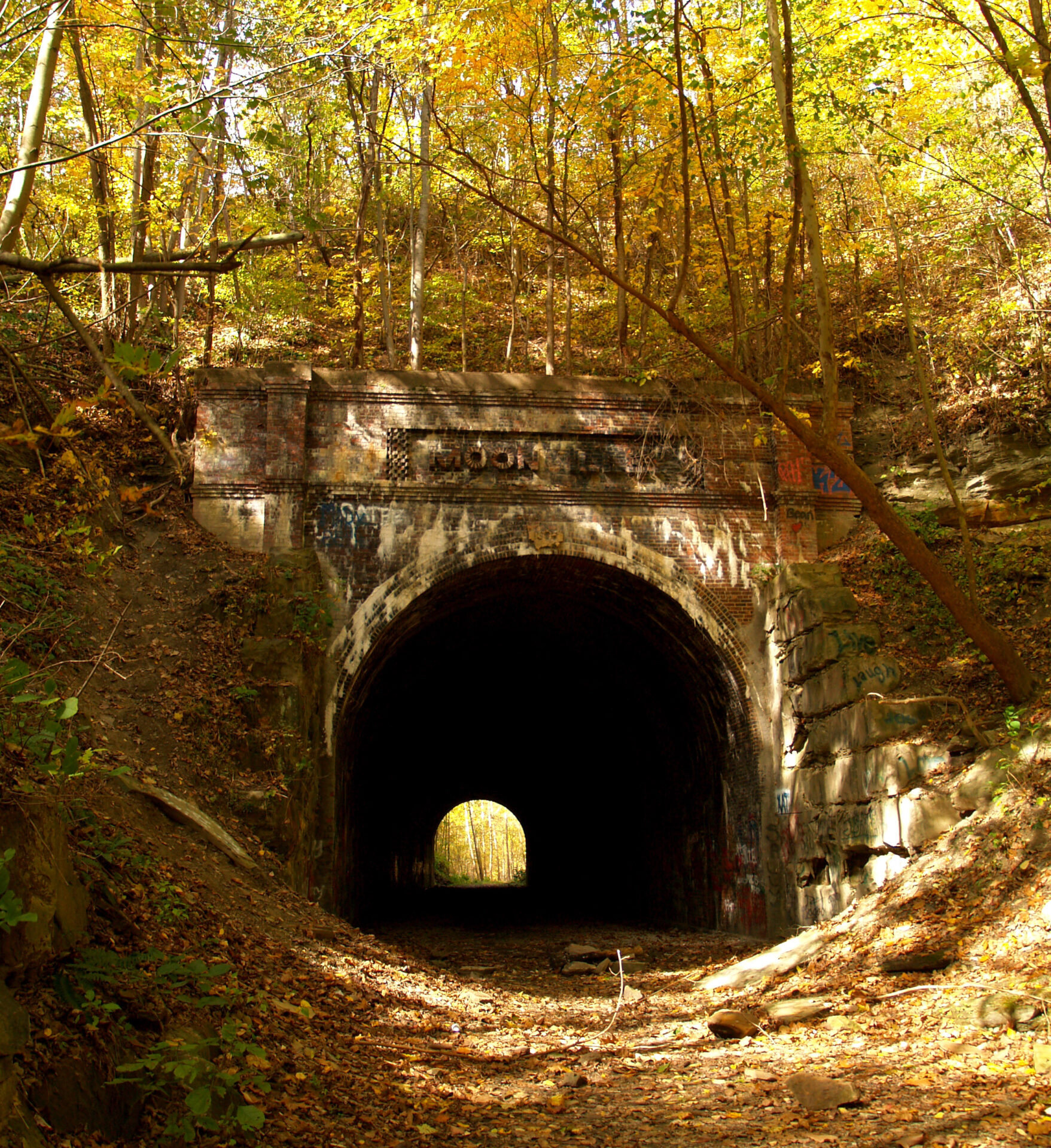 Traveling the winding roads and hairpin turns of Southeastern Ohio, it’s easy to get lost in the rugged beauty of the foothills of the Appalachians and find yourself admiring those who came before and carved out a life among the untamed forests.

One almost forgotten place is the ghost town of Moonville. Yes, you read that correctly, ghost town. In fact, if it wasn’t for those before us who decided to stick around a bit longer, you may not even know Moonville existed.

Due in part to the iron boom, in the 1850s the Marietta and Cincinnati Railroad expanded through this challenging terrain of Ohio, and the tiny hamlet of Moonville was born. The railway allowed for quicker shipping of goods and transportation for coal and iron ore. The isolated tracks had no signals resulting in many collisions with oncoming trains, earning it a deadly reputation. 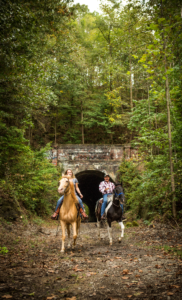 As the region’s iron and coal resources were depleted, the small town of Moonville slowly dissolved and was abandoned by the 1940s. Trains continued to run into the 1980s. All that now remains are scattered foundation remnants, the rail bed, and two tunnels, Moonville and King Hollow.

Pedestrians often used the narrow brick-lined Moonville Tunnel to cross through the hill. If someone was caught inside when a train went through and miraculously could align themselves between the walls and the train, the vibrations often caused them to lose their footing and fall into the train.

King Hollow is a short distance from Moonville and is constructed with timber beams. It has one recorded death. According to the Ohio Exploration Society, in 1927, a man named Pleasant Thomas was asleep on the tracks when he was run over by a train.

When the railroad abandoned the rail line, the tracks and bridges were destroyed. However, thanks to the volunteer-based Moonville Rail Trail Association, a new 10-mile rail trail, including 11 new bridges, has been built for public enjoyment.

As Moonville moves into the modern era, there are those who will not let us forget its past. Stories of mysterious sounds, ghostly apparitions, and legends of those who died along the tracks continue to haunt the area. Today, Moonville is a destination not only for outdoor enthusiasts but also for anyone interested in the paranormal.

The many deaths along the tracks have conjured tales of ghostly apparitions that have lingered for generations. The rugged terrain, design of the tunnels, and sometimes harsh weather has ‌led to multiple deaths.

In 1859, a brakeman for the railroad was fighting off the freezing weather that night with a bottle of whiskey. This was common practice to stay warm, but he fell under the wheels of a passing train. Reportedly, a ghostly figure has been seen waving his lantern at night and letting out a blood-curdling scream.

People living in the area would use the clear path of the tracks to travel. Because of the winding tracks and hilly woods, the sound of oncoming trains often reverberated against the hillsides. This would lead pedestrians along the tracks into mistaking just how far or close the trains were. The trains often traveled at speeds over 50 miles per hour. One unfortunate woman was on a trestle when a train came and she was forced into jumping to her death in the ravine below. Witnesses tell of seeing a female apparition, followed by the scent of lavender. 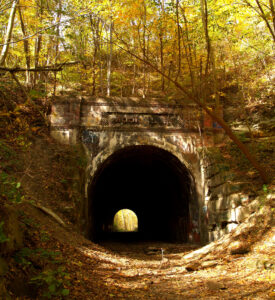 Another tale is of a flagman attempting to stop the train during an epidemic of smallpox. The railroad ordered the train not to stop, and the speeding train crushed the man. There were multiple reports years later of train conductors being flagged down by ghosts.

If all this sounds ‌hard to believe, then read this. According to research conducted by YouTuber TheVHSVlog, in 1981 the CSX railroad had to install electronic signals along the tracks because many of the engineers were reporting ghost sightings near the Moonville Tunnel.

In celebration of all things macabre and ghostly about the area, Midnight at Moonville is the place to be. The small festival always takes place the second weekend in October, this year held on October 8 and 9.  Hours vary, so it’s best to check the schedule posted on the website. Most activities are free, but there is a small charge for parking. The Vinton County Convention and Visitors Bureau hosts the event, which includes: dramatic storytelling, souvenirs and merchandise, wagon rides, historic presentations, live music, regional craft vendors and some roaming spooks—make-believe and real?

The Vinton County CVB recommends wearing comfortable walking shoes and bringing a flashlight. Depending on the paranormal activity that night, you may or may not need your imagination.

With its breathtaking beauty, the Moonville Rail Trail winds through scenic Zaleski State Forest and is just a short distance from Lake Hope State Park. It is a popular trail for nature enthusiasts, hikers, history buffs, and those in search of the paranormal. In 2021, the tunnel was added to the U.S. National Park Service’s National Register of Historic Places. It is certainly worthy of a spot on your bucket list.